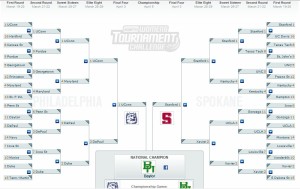 The top half of my bracket

I don’t have much time so I can’t get into this too much. I will say that I didn’t see too many upsets here. The one big upset that I picked was Ohio State over Tennessee. The Volunteers are not the power they once were, and Ohio State is playing like the team we thought they would be at the start of the season. That should be a great game. I then have Notre Dame taking out Ohio State to move to the Final Four. END_OF_DOCUMENT_TOKEN_TO_BE_REPLACED

Here is the photo gallery from the game on Sunday. Now as many of you know when you are at Notre Dame and the game is televised you cannot take pictures when the game is going on. You can take pictures before the game, during timeouts, and after the game. Taking them during the action is prohibited. I honored their wishes and did not take pictures during the game. Any pictures that appear to be during the game have actually been re-enacted for effect. To honor their wishes I have not posted any pictures of their basketball players unless they are part of a picture. I understand that they don’t want any publicity for their team, and I have tried to crop their players out when possible. I use to go to a lot more games at Notre Dame, but since my hobby is taking pictures I will usually only go to games that are not on TV. So here are the pictures taken Sunday.

END_OF_DOCUMENT_TOKEN_TO_BE_REPLACED 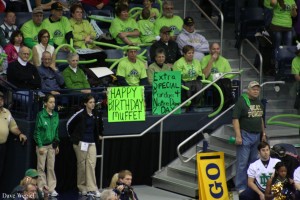 Yesterday their were many storylines heading into the game. It was the 1,000th game in the history of Notre Dame women’s basketball. That game also happened to come on Irish coach Muffet McGraw’s birthday. Purdue came into the game 0-4 in the last four meetings against the Irish. They still had to be stinging from the late game collapse against Maryland on Thursday. END_OF_DOCUMENT_TOKEN_TO_BE_REPLACED

This week the pick for the game of the week is not so easy. The Purdue men’s team plays a tough game today against Alabama. Tomorrow the Purdue women travel up near me to play Notre Dame, and then later in the week the Purdue men travel up here to play Valpo. I decided to look at both the games in my neck of the woods this week. I normally have to travel about two hours to see Purdue play. This week I can just go about a half hour either way to see both the men’s and the women’s teams play. You can’t beat that. I doubt that they had me in mind when they made up the schedule, but if they did thank you. END_OF_DOCUMENT_TOKEN_TO_BE_REPLACED

Tonight I went to South Bend to see two premiers. The first was the first basketball game in the n

ew Purcell Pavilion (formerly the Joyce Center). The second was the first Notre Dame game for Skylar Diggins. First off I want to say that they have done wonders with the old Joyce Center. I was expecting an uncomfortable time in the wood bleachers up top, but was surprised to see nice new chairs in place of the bleachers. I will go a little more into detail on the new amenities in a later post. For now let me say that it is very nice. I could say the same thing for Diggins. She scored 17 points on the night which was along with Erica Solomon a team high. She seemed very comfortable on the floor, and should be something to watch as time goes by. The only knock that I have from her play tonight was her four turnovers. It is early though so I don’t think that the Irish faithful should be too concerned. Notre Dame won easily in the end 97-53 over the Indianapolis Greyhounds. Six players ended the game in double digits. This team can really pressure the opponent and create turnovers. With a mix of veterans and newcomers it will be interesting to see how this team progresses as the season goes on. They start the season ranked fourth in the country. This could be a special season.
http://csd72.blogspot.com/feeds/posts/default?alt=rss

With four teams left I decided to take a look at my bracket just like I did on the men’s side. I have three of the four teams still in it. I picked one of the two #2 seeds that won this week. With the women you can usually pick by the seed. Sometimes though you have to guess. That is pretty much what has been going on this week. Unlike the men’s side I feel good about my picks coming up. I think that UConn is strong, and should get to the finals. I think that will be a great final. Tennessee just finished beating both teams that I have season tickets for in back to back games. They beat Purdue fairly easily last Tuesday in West Lafayette, and rallied to beat the Irish Sunday night. I think that they will make it to the finals, but UConn and their freshman sensation will be too much for them to handle. There are still three games left to play though, and anything can happen. That is why it is called March Madness. That does not change just because it is April.

Confessions of a Sports Junkie
Create a free website or blog at WordPress.com.