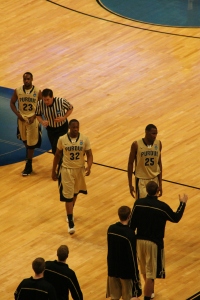 As I was sitting stunned in my seat at the United Center tonight I was thinking about how things had come full circle. This season ended for me exactly how it started. I remember sitting in Ross-Ade Stadium when a friend sent me a text about Robbie Hummel tearing his ACL again. Once I confirmed it wasn’t a sick joke I had a feeling in my stomach like I had been punched in the gut. Late in this game I had the same feeling once you knew it was over. They showed Rob on the jumbotron crying, and I had that same sick feeling in my gut. Combine this with the terrible way the seniors went out in football, and things get even worse. We have seen some of the best to come through Purdue this past fall with Kerrigan, and now with JJ and Smooge. None of them went out the way they would have liked. END_OF_DOCUMENT_TOKEN_TO_BE_REPLACED 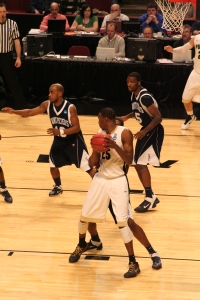 JJ wondering which move of his moves to use

I have had a couple great moments in the United Center. One of them is any time you hear the National Anthem during a Blackhawks game. Hearing it during a crazy standing room only crowd before a Red Wings game is awesome. Another great moment was watching Jordan drop 55 on the Bullets in 1997. It was game two of the playoffs, and the Bulls were not playing well. Michael just put them on his back to lead them to the victory. That was my first Bulls game so I picked a great one to attend. The best moment in the Madhouse though was watching the Sox clinch the World Series on the jumbotron. I wanted to experience the game as though I was there, and the party that ensued was great. Today was just another addition to that set of memories. END_OF_DOCUMENT_TOKEN_TO_BE_REPLACED

I was lucky enough to be at the United Center today for the Boilers practice. Last year I saw them play three games in two rounds of the NCAA Tournament, but different things prevented me from seeing them practice. Since they were so close this time I thought that I would see what it was all about. I got to the United Center early so that I could watch some of the other teams as well. When Purdue was not on the floor the most exciting thing was watching the tourney games on the TV’s located on press row. Luckily they had a few games going at once so it was like I was at the coolest sports bar in the world. END_OF_DOCUMENT_TOKEN_TO_BE_REPLACED

Here are the pictures from the Notre Dame game against Georgetown. Since you cannot take pictures during the game these are only from pregame, halftime, and during a few timeouts. This was the first of what I hope are many games I see this season with two ranked teams. 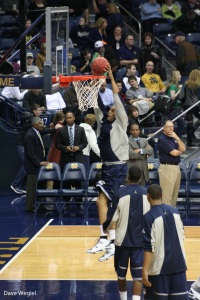 One of the Georgetown players dunks pregame

END_OF_DOCUMENT_TOKEN_TO_BE_REPLACED 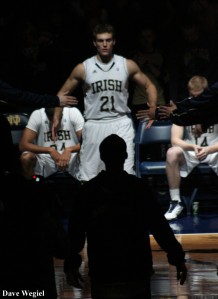 Tim Abromaitis during the pregame intoductions

Last night I went to Notre Dame to watch the #15 Irish take on 9th ranked Georgetown. It was part of my four games in four days drive to end the year. For some reason I thought that Notre Dame would win the game. I even picked them this week in my weekly pick segment. The win was not because of the home crowd though. They only got going twice, and that was short lived each time. Games without the student sections are by far the worst. The students seem to generate 90% of the crowd noise. A big game like last night with the students would have been a great atmosphere. Instead people came in late like the Irish were playing Southest Missouri State. You are playing a top ten team…get to the game and get loud! END_OF_DOCUMENT_TOKEN_TO_BE_REPLACED 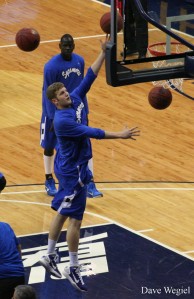