When they needed it most the Sox got the pitching. John Danks came out tonight and threw one hell of a game. Just like Mark and Gavin did the previous two nights, Danks came out and threw a gem tonight. Eight innings pitched and only two hits. What a game. He is quickly earning respect on the South Side. His pitching was great, but Nick Blackburn pitched a great game himself. One bad pitch amongst many good ones was the difference between the winning and losing pitchers.
In a close game it came down to a play that was not even close. Jim Thome hit a 461 foot shot to straight away center that was the deciding factor in the game. Off the bat I was screaming, and as Hawk said last night I think I stripped a couple of gears when it finally went over the wall. Ken Griffey also shocked the crowd when he threw a perfect strike home to A.J. to cap a double play. Tonight it just seemed like fate was on our side. So many moments that seemed to define the game. The double play in the first also helped our cause.
Bobby Jenks came into the game to pitch a scoreless ninth, and Brian Anderson capped the game

with a great catch to end it. The celebration after the game was great, and it made me crazy enough to spend $35 on a Division Champs hat. Hopefully I can waste more money on a ALCS hat, and a World Series hat. Am I dreaming? probably, but anything can happen in the playoffs. That is why it is so important just to get in. The Twins are a great team. They scare me every time that we play them. The just keep reloading every year.

I was able to go to tonights game because a former supplier called up this morning to offer me tickets. After the past couple of weeks maybe we should make them a current supplier again. Any playoff tickets would put them there in my book. I have been to some great games, but this one has to be tops so far. I was able to be part of a great atmosphere, and see my team clinch. Thank God we won the simple coin flip a couple of weeks ago, and this game was in Chicago. If not I could be feeling very different right now. In 2005 I kicked myself because I would not shell out the big money to see at least one playoff game. This year I may have to go to at least one.

Edit: This was my 500th sporting event that I have attended. What a game for the milestone event.

With an exciting win tonight the Sox live to play another day. They will get the Twins tomorrow night at 6:30 for the Central. I am trying my ass off to get tickets right now so I can hopefully get there. I may just head down anyway and try and get in anyway that I can. Let’s go Sox! 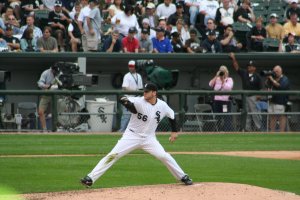 This title serves two purposes. I think that I had left this site for dead. I really have been keeping busy enough in my life that it became very hard to keep this blog up. I really did not attend too many sporting events this summer so I let it go. Over the last couple of weeks I really piled them on though. I will re-start this blog by talking about the Sox game that I saw today. I received some tickets for the game from a supplier that we don’t even use anymore. When I got them over a week ago I knew that I would not see the team clinch. That is because I thought that they would have gotten the job done by now. As the title of the post suggests the Sox needed to win today to

extend the season. Mark Buehrle was pitching on three days rest, and to top that off he threw 121 pitches in that outing. Before the game I never thought that he could be effective for as long as he did. His performance today really solidified his status as one of my all time favorite Sox players. He stepped it up when his team needed him most today. He went seven solid innings only giving up a second inning home run. With the bullpen as shaky as it has been we needed a solid start today. Mark seemed to induce a double play every time that he needed one. He even showed his patented pick off move to pick off a base runner. Matt Thornton and Bobby Jenks each contributed a solid inning in relief today to secure the victory for Mark.

The offense decided to hit today as well. Paul Konerko hit a solo shot in the second to tie the game, and start the rally that ended up deciding things. For once I actually got the swing on film. The above picture is his follow through on the dinger. The Sox used some timely hitting and some help to score three runs in the second. They added two more in the seventh to add a little breathing room. I would not have felt safe until we were at least ten up the way that things have been going.

The Sox need to win the next two games to make the playoffs and play the Rays on Thursday. They get Freddy Garcia and the Tigers tomorrow. The game will feature a former Sox player Freddy Garcia, and the player that we traded him for in Gavin Floyd. That should be an interesting game. If we win that one we get the Twins at the Cell. My nerves are shot. I wish that I would know either way. I know that we will probably get killed if we make the playoffs, but it would sure be nice if we did. Today’s game had a playoff type atmosphere, and I can only imagine what it would be like to actually be at a playoff game. I may have to be ‘sick’ on Tuesday if it comes down to a one game playoff for the Central. I will probably not get to go so it is fitting that I end the baseball season with game #81 (on the ticket) of the season when it started with game #1 at Comiskey.

Over the next couple weeks I will try and get caught up on what I have been doing. You will get to see how my trip to New York went. I made stops in Cooperstown, Shea Stadium, and even to see my Sox play in Yankee Stadium. I also have some catching up to do in football.

Part of the reason that I decided to start this blog up again was the fact that my two favorite teams met yet again on the gridiron. This was my 10th matchup in person between Purdue and Notre Dame. This year may have been the biggest toss up over who would win. I really never knew until the game was nearly over. I go to so many Purdue games that it is hard to root against them. That is until the Purdue fans get going. They really are hard to take when you are wearing the other teams colors. Maybe that has something to do with the fact that I had Notre Dame colors on. That seems to bring out the worst in Purdue fans. For some reason they release all their hate on one opponent. That is the biggest reason why I still root for the Irish every year during the game even though I am a Purdue season ticket holder. It made me feel good to see the Purdue fans that were so obnoxious early leave with their heads down. With nothing to back up their talk they just had one option to leave early. Enough about the fans. Here are some thoughts on the game. 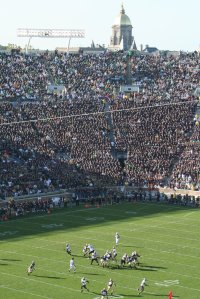 Purdue seemed like the better team early. Korey Sheets scored a touchdown early, and it looked like the Irish would not be able to stop Purdue. Then Curtis Painter took control of the game. He threw a touchdown pass to Robert Blanton that changed the game. The only problem is that Blanton is a member of the Irish. That play was a gamebreaker. For some reason it woke up the Notre Dame offense. They traded a few touchdowns until the Irish took over the game late. Painter was terrible though under the shadow of the dome. I love the guy to death, but he missed so many wide open receivers that even I wanted him out of the game. I saw his brother at the half, and he was just sitting under the stands looking very unhappy. Enough about goats lets talk about stars. Two of them are on special teams. All season long I have been watching Dan Dierking star as a gunner on the kickoff team for the Boilers. Last year he was amazing, but this year he has been even better. He really was not a factor Saturday, but is still fun to watch coming down the field. Notre Dame seemed to key on him a little. One player that I cannot believe Purdue did not key on was Mike Anello. He is a former walk on that is now a scholarship player for the Irish. He was in on every tackle for the kickoff team. Somehow he ends up untouched every time. At some point you would think to account for the man. 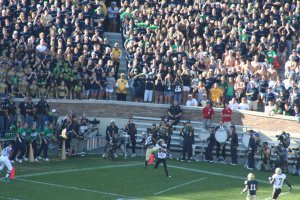 One matchup that was great last year, and was great this year was between WR Golden Tate for the Irish, and David Pender the cornerback for the Boilers. The picture to the left shows one of the times that Pender lost. It was for a touchdown. Pender did a great job for the most part though. He really is a good corner, and he shut down a very explosive player today. Michael Floyd took advantage of the cover corner on Tate, and had a solid game. Notre Dame had not broken a run of 20+ yards all year, but they got the running game going at the right time. Armando Allen broke a couple long runs, and that running success helped open up the passing game. That balance is what the Irish need, and what won them the game.
Now that the game is over I can go back to rooting for the Boilers. They have a tough test ahead of them Saturday when Penn State comes to town. I will in in West Lafayette to see the game, but I don’t have a great feeling about it. I may actually have to do a preview for the game though since it is a big one.