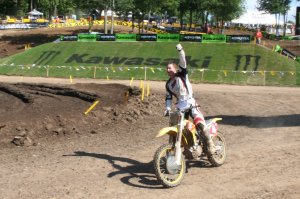 Today I took in my first race at the famed Red Bud Motocross track in Michigan. I have seen Supercross and Arenacross, but this is a different animal altogether. Before we went into the track I thought what I saw was big. When I got inside I realized just how big the track really was. The men who race around it are very talented, but they also must have a screw loose. They do things on a bike that most people would never dare do. There are so many blind jumps around the track that they nail at speed. I have the utmost respect for what they do, but I could never do it. Rickey Carmichael finished 2nd in the first moto, and won the second moto to win his 7th straight overall at Red Bud. He is taking a short break from racing to try out stock cars before he finishes his career in Millville, Minnesota. This was his 101st Motocross victory, and his 149th Supercross/Motocross victory. Ryan Villopoto won the lite division overall by sweeping both races.

Today Jeff Gordon got his 77th win by besting the field at Talledega. I actually had a shot to go to the race with a group from LaPorte, but declined. Part of me was sad that I was not there to see him pass Dale Earnhardt. The fans littered the track with whatever they did not want to take back to their trailers just because Earnhardt did not win. It was a good win for Gordon, and on Dale’s birthday no less. NASCAR fans who can enunciate are rejoicing today.

Kevin Harvick wins the 2007 Daytona 500. (I know the picture is old, and the wrong series, but I haven’t had the chance to photograph his new paint scheme yet.) He made a great pass around Martin, and about three other cars in the last corner. I thought that Martin had the race, but NASCAR did not throw the caution when the wreck happened. That will probably be the talk the next week until the new controversy can come forward. If the Busch brothers keep it up their name will be like Bodine around the garage. Kurt takes out his car and Stewart’s today.
The best part of the race today was the experience that I got with NASCAR.com. The raceview was great because I watched Gordon the entire race. On the same page you can also listen to his in-car audio. Towards the end of the race you could hear the displeasure that he had for Boris Said. During one caution he was talking about the “idiot drivers” out on the track. His spotter asked him about the bump he just got in turn three, and Gordon said “I can’t wait to ring his neck.” He spent a large part of the red flag talking about the fact that he cannot see out of his windshield. He kept trying to get the ok to clean it, and then just decided to lean out and do it himself. On the FOX broadcast they went to a long shot, and you could see a white rag going up and down the window of the 24. His spotter was telling him that the cars behind him would go up high with him if he wanted it, and he said that he couldn’t see. His spotter told him to keep racing in the middle, and he wouldn’t need to see out of the front of his car. It was a good time watching the race on TV and the computer, and listening to Jeff and his crew. They had some good comments the whole race. At the end one of the last transmissions was that the #24 car would be one of the cars picked for a random inspection after the race. His crew chief asked how the templates would fit with the car tore up. Jeff had a terrible car all day, and finally had things on his side at the end of the race. He was in 8th spot when the last wreck happened, and ended up finishing 12th. For how his day was going most of the race that was not too bad of a finish.
My prediction to win the race was Tony Stewart. Thanks to Kurt Busch that did not happen. The only good news was that Kurt took himself out as well. Tony had just come from 40th in the field to take the lead right before the wreck. So I missed that one, but did predict that Montoya would be the highest finishing rookie. That was wrong as well. David ‘crash’ Ragan finished in 5th position. Montoya was 19th. The only other rookie was David Reutimann finished 40th. I had a one in three chance, and missed this as well. Hopefully my other predictions will be a little better.

Today the 2007 NASCAR season officially begins. So far the buildup to the 500 has been about the teams trying to bend the rules. This is NASCAR, that is what they do. Tony Stewart has been the class of the field leading up to today. He won his 150 race along with the Bud Shootout a week ago. This has been the most excited that I have been for a NASCAR season in a couple of years. I haven’t been to a race since 2004, but maybe I could find time in my schedule this year to go to a race. Another cool thing that I found this year is the NASCAR racecast. They have taken GPS technology, and applied it to their new engine. What you get is a real time view of your driver and the other drivers that looks like the old NASCAR 3 game. I watched the first Gatorade Duel race on this the other day, and it was pretty good. It comes with a decent price tag $12.50 a month, but it is free for the first two weeks, and something to check out. Before the season starts I will try and make a few predictions that we can laugh at when the season is over.

Daytona 500 Winner: Tony Stewart. How can you argue with what he has done so far in speedweeks? He seems to clearly be the man to beat this year, and especially here at Daytona.
Daytona 500 Rooke of the Race: Juan Pablo Montoya. He has been strong so far, but mechanical issues have kept him from finishing a race. With a team like Ganassi behind him I don’t see this continuing.
Race of the Year: The spring Bristol race will be the one to watch. You have the racing that has been a trademark of the track, but this year you add the debut of the car of tomorrow. This will be the one to watch.
Rookie of the Year: Juan Pablo Montoya. Not really going out on a limb here. He is a great driver with great equipment under him. He could even make the chase if he figures out the car quick enough in the season. He will be good on the larger tracks, but the technical tracks will tell the tale for his season.
Nextel Cup Champion: Tony Stewart again. I think that after missing the chase last year you will see Stewart come out with a bang, and retake his place at the top of the NASCAR world. He is one of the best racers on the circuit, and his fire along with his team will get him the cup this year.
Big Name Driver to Miss the Chase: Dale Jr. I think he will have too much going on this year away from the track to do well on it.
Suprise Driver in the Chase: David Stremme. This one was hard. What is a surprise driver? I wanted to say Dale Jarrett because of the new team and new make of car, but he has been here before. Stremme has not, and looks poised to make his mark this year. I had J.J. Yeley, but backed out at the last minute to go for Stremme.
Chase Teams: Tony Stewart, Jeff Gordon, Matt Kenseth, Kasey Kahne, Kurt Busch, Kevin Harvick, Jimmie Johnson, Carl Edwards, David Stremme, Kyle Busch, Denny Hamlin, and Jeff Burton 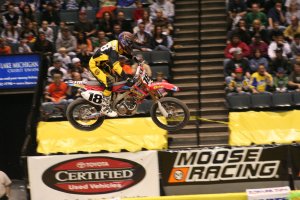 After the Grand Valley games we went to Van Andel Arena in Grand Rapids to watch Arenacross. I did not know what to expect, but had fond memories of going to supercross races in the late nineties. Arenacross is quite a bit different. They are all running four strokes now, so the smell that I remember is gone. They also run a much smaller track because of the space limitations. The racing was exciting, but because I did not know most of the riders it was not as exciting as the old days. One rider that I remembered was Brock Sellards. He was clearly the class of the field, and ran away with his races. The racing was interesting, and I would definitely go back. It did make me want to see a supercross race though. That may be in the future this year. Who knows how much that has changed though.

This weekend brings the end of the NASCAR season. I am not as involved in NASCAR as I was a few years ago, but I still follow it. My favorite drivers have all been eliminated from contention for the Cup. Tony Stewart and Tony Raines never were part of the chase, and despite a fourth place finish last week Jeff Gordon is too far back to win it. The one scenario that will make me happy this Sunday is if Jimmie Johnson wins the Cup. Jeff Gordon is co-owner of the car, and of course he races for Hendrick Motorsports. Johnson has a 63 point lead going into the race over Matt Kenseth. All he needs to do is finish 12th or better, and he will win the Cup no matter what anyone else does.