I was silent on here when Michael Jackson died. I was one of those people who enjoyed his music, but did not agree with some of the choices that he made off of the stage. Today I went to the Railcats game against Joliet in Michael’s hometown of Gary, Indiana. The main reason I went was the fact that the Railcats had on jerseys similar to the 1977 White Sox, and the Jackhammers had on jerseys that looked close to the 1984 Cubs. For the majority of this post I will try and sum up the game using Michael Jackson song titles. This may work out good, or it may work terribly. We will soon see.

This was a back and fo 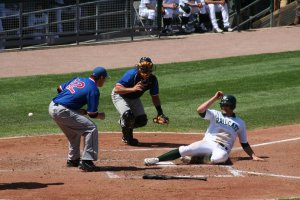 rth game, a “Thriller” if you will. If you came to the park looking to see some exciting plays then “You Are Not Alone.” The Jackhammers took a 2-0 lead in the second inning with some timely hitting. The Railcats got on the board themselves and took over the lead in the fifth when a “Bad” play by the Jackhammer right fielder turned a RBI triple into a two run hit. Mike Massaro watched a throw go wild of third and decided to “Beat It” home. He made it safely to put Gary up. Massaro proved that he is truly “Dangerous” today. He drove in two, and scored one. The right fielder will have trouble looking at the “Man in the Mirror” tomorrow morning. As the ball sailed out of his hand he was probably thinking “I Want You Back.” Kevin Rios got things going for Joliet in the 8th with a triple “Off the Wall.” He scored when the next batter singled. The second Joliet run in the 8th scored when the pitcher throw wide of first on a routine play. The kind of throw has “Got To Be There.” The crowd in Gary was “Speechless.” The Gary first baseman thought the runner to first was out of the baseline. He walked down towards the home plate ump looking like he “Wanna Be Startin‘ Somethin.” It is just “Human Nature” to want to argue a call like that that could potentially change the game. Every play is not always “Black or White” as far as the ump is concerned. The ump said “Leave Me Alone”, and the inning ended with a strikeout by the next batter. The Railcats came up in the 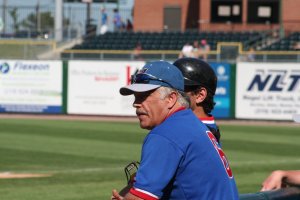 8th needed one to tie. They got the leadoff man on when he was hit. He scored on a double by the next batter. As Steve Haake was standing on second you could see him eying Jay Pecci who had just scored, and thinking “I Wanna Be Where You Are.” You could feel the tension in the crowd. They seemed to be saying “Don’t Stop ‘Til You Get Enough.” Everything seemed to “Come Together” on the next play. Jordan Czarniecki singled in what would be the winning run, and the crowd let out a collective “Scream.” Manager Wally Backman looked at his team and cursed them for “The Way You Make Me Feel.” After a brief rally by the Jackhammers in the ninth Eddie De La Cruz said “You Can’t Win,” and got the save despite most likely having “Butterflies” after coming in a game with inherited runners. Will I end this anytime soon? When I get on a roll “I Can’t Help It.” I think of another song, and I just “Smile.” My next game at this stadium will probably be July 13th when Fergie Jenkins is scheduled to make an appearance. “Will You Be There?” The game starts at 7:00 cst so be sure and “Remember the Time.” As always “Keep the Faith.”
Okay, that was not so bad. Was it? On a serious note I saw one of the most scary sites that I have seen on a ball field during the game. In the bottom of the 8th inning Jay Pecci fouled a ball straight back that hit the home plate 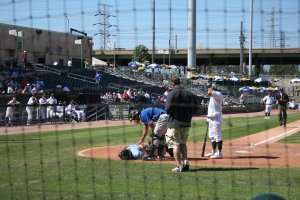 umpire in the chest. The umpire crumpled like a ton of bricks to the ground. I was close to the play, but the sound was still very awkward. Emergency crews rushed out to check him out, and he started moving around a bit. He eventually got up, and walk off the field with the help of the emergency crew. He was worked on in the Jackhammer dugout for a long time. He ended up talking with some of the players, and seemed to be fine. I was sitting right next to the dugout, and from what pitching coach Floyd Youmans had to say the ball must have just nailed him in the heart. The way he fell tells me that he was not concious when he went down. That was scary. Both Youmans and Wally Backman were watching intensely from the get go. They have seen a lot of things, and Floyd even said that he had never seen anything like that. After a delay to get the gear on for one of the other umpires the game was restarted. Below are some other pictures from today. 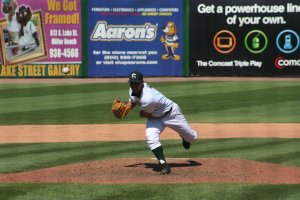 Doing some test pictures to try and eliminate the screen. 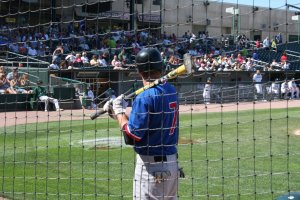 The Jackhammers have some weird bats 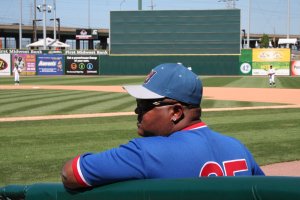 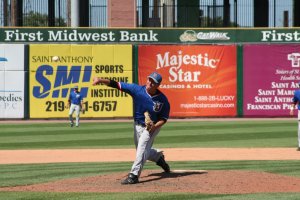 This pitch is going to get crushed 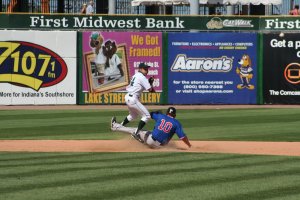 Breaking up a double play the hard way

Edit 8:50 PM: I just saw online that the winning pitcher from the game Edwin Walker has been sold to the Yankees. When he was told to report to the Charlston RiverDogs their class A team he said “I’ll be There.” Sorry had to get one last one in. 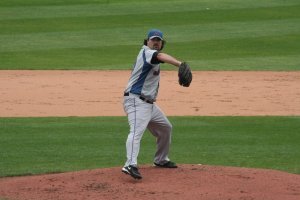 Gary South Shore Railcats (say that fast three times) in his return to the area. Of the six games that the Jackhammers played in Gary they only won two. Both of those were the starts by Mumma. He is 3-1 on the season playing for a club that is only 6-15. That kind of tells you that he is doing alright. I was only able to see the game yesterday, but he really impressed me. He looked great out on the mound. I found the pitch speed board in the fifth inning, but from there until the seventh he was hitting around 80 MPH as a high. He must have been reaching back in the eighth because he started hitting around 84-85. His last pitch of the game, an RBI double, registered at 51 MPH. Either he threw the ball in underhand, or the pitch speed can be off at times. He threw 119 pitches in the game, which by today’s standards is quite a few. His only walk of the game moved a runner to second who scored the only run that he gave up on a double to the next batter. Overall though he pitched a very solid ball game. It is no wonder he was named to the 2008 Northern League All Star team.

Brad actually played baseball with my brother when he was a kid. His father was the coach of the team. Brad went on to play for the LaPorte Slicers having a nice career. Brad w 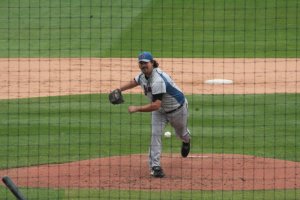 as a three sport athlete at LaPorte even earning 1st team all state and academic all state in Football. He was an Honorable Mention All State first baseman in 1999 for the Slicers. He set the teams single season and career home run records that year. He will always be remembered in LaPorte for hitting a home run the weekend of his father’s death. In a baseball town, it is things like that that become legend. After high school Brad ended up with Western Michigan University where he earned second team All MAC. Brad was selected in the 32nd round of the 2003 draft by the Toronto Blue Jays. He peaked at Double A New Hampshire in 2005. He played with them until the 2006 season when he was let go while playing for the Lansing Lugnuts. I was up in Lansing watching Jeff Samardzija pitch when he was still on the roster. When I went to look up a little more info on him I found out that he had been released. Later that year I went to Gary to watch a game while he was with the team. Shortly after that he went on the DL, and did not play the rest of the season. He has stayed in the Northern League since 2006 playing for Gary, Schaumburg, and Joliet. After watching this solid performance today, we may have to take a trip to Joliet to see him pitch a game or two there. After all I am the sports junkie, and it doesn’t take much of an excuse to get me to go to a game.
http://csd72.blogspot.com/feeds/posts/default?alt=rss 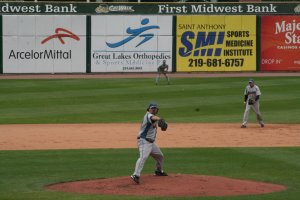 earlier this week so I had planned to make a trip to the murder capitol to check things out. I have only been to two Railcat games before today. They are probably the closest team to me time wise, but I still have trouble going to Gary to see them. U.S. Steel Yard is a nice field, but part of that may be the fact that the players here are on the way out. The players in South Bend have a much better shot at hitting the big time. When I woke up this morning I checked the forecast, and during the hours that the game would be played there was an 80% chance of thundershowers. I almost did not go because the cell was at the state line, and was big enough that it could not miss. It split in two though, and went above and below Gary leaving the ballpark high and dry. When the sun came out it was actually a perfect day to see a ballgame.

The game itself was not as dramatic as the weather. Joliet defeated Gary 7-1. Th

is game would have been a lot closer if it had not been for Joliet getting the big hit. Six of their seven runs came with two outs. Gary’s at bat in the bottom of the eighth would have been a lot more exciting had the Gary pitchers closed out a couple of innings. Only a solo home run to start the 5th by Phil Avlas (pictured to the right) stopped all the runs from being scored with two down. LaPorte native Brad Mumma pitched 7 2/3 innings to give the Jackhammers the cushion that they needed. I will have a little more about Brad tomorrow. The local kid deserves his own post. A two out home run by Freddie Thon got the Jackhammers on the board in the 3rd. That would be all that they would need. The Jackhammers had two bunt hits on the day, and both of those runners scored. Their timely hitting was the difference today.
Another interesting fact about the day were the coaches for Joliet. Wally Backman is the manager, and Floyd Youmans is the pitching coach. Before the game I was do

wn by the Joliet bullpen listening to Floyd drop the F-bomb like it was his job. He really enjoys that word. I even heard him use it as an adjective to itself. Backman on the other hand is the old school manager. He spends his time in between innings in the dugout hot boxing a cigarette. Can’t have a nicotine fit while you are coaching third can you. He was a pleasure to watch play though, and it was cool to see him again. As you can see by the picture to the right he is telling his team that it is time for another smoke. Lets get this inning over. The Joliet uniforms are very reminiscent of the old Mets away uniforms in color at least. I wonder if Wally had anything to do with that.
http://csd72.blogspot.com/feeds/posts/default?alt=rss