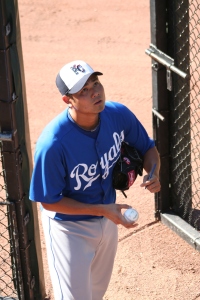 Royals pitcher Bruce Chen signing some autographs before the game

Last night I was at the Cell to see the White Sox take on the Royals. I have been to Minor League games on the Fourth of July before, but never a Major League game. For once I really did not have much going on on the holiday so I found a very cheap ticket on StubHub that would allow me to see the Sox on the Fourth. I got to the game a little early to watch batting practice. Last season while on a bus trip I watched the fun that Bruce Chen and Joakim Soria had in the outfield. I usually stand by the Podsednik seat, but I stood a little to the left of that in order to watch them again. They really do seem to enjoy what they do, and it makes you like them as players even if they play for a division rival. Chen even took the time to sign some autographs for some younger Sox fans in the Royals bullpen. While taking some pictures of this duo I noticed that Mike Moustakas was at bat. He is a lefty with some pop so I quit taking pictures long enough to watch his at bat in the cage. He hit a ball that off the bat looked like it was right at me. I hurried up and set my camera down, and got my hands up just in time to snag the ball. I was sitting about seven rows up in the bleachers, and the ball was hit right at me. This was about the same spot that my brother snagged the ball hit by Jeter last August. I was not even trying to get a ball, and of course one is hit right at me! Luckily I caught it with all the people watching. END_OF_DOCUMENT_TOKEN_TO_BE_REPLACED