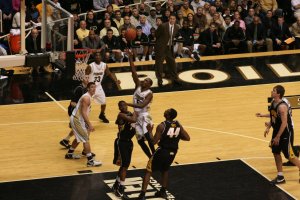 For the second straight game E’Twaun Moore was the leading scorer for the Boilers. He only scored 12, but on this balanced team it was enough. Purdue spent most of the first half trying to overcome one officials calls. I have never heard an arena boo a ref so loud, and so long. They booed him during an entire TV timeout, and then after an immediate bad call they kept it going. Purdue went into halftime with a one point lead. They came out of the break playing good ball, but could never put Iowa away. Every time they would get a six or seven point lead Iowa would hit a three and start creeping back into the game. The Boilers led by three with 5 seconds left when an Iowa player drove to the basket. He was fouled and goaltending was called. After a made free throw the game was tied. Keaton Grant took the basketball down the length of the court and was fouled. He made his first free throw, and then missed his second on purpose because there was only 1.4 seconds on the clock. That is important because he had made 27 straight in Big Ten play. He was leading the league in free throw percentage. These kids only care about winning. They make it worth the almost four hour round trip drive down to West Lafayette to watch them play.

Yesterday I did the double that seems to happen once a year. I was already at Purdue still celebrating the win over Wisconsin, and decided to go to the women’s game against Illinois. The Boilers were wearing pink uniforms to support the fight against breast cancer. Purdue seemed to be giving the game away once again. They could not get the offense in gear in the first half. They still were close though. With about 11 minutes left in the game the Boilers were down three, and Coach Versyp called a timeout. The Boilers came out of the timeout firing and were quickly up 11. They put on an offensive show. They put the game away and took home a 71-59 win. The team is now 10-10 on the season, and fighting to stay in contention for a spot in the NCAA tournament.
After that I drove up north to see the #16 ranked Notre Dame women take on the top ranked Connecticut Huskies. I thought that the game would be over quickly, but the Irish came out firing. They were hot as a team, but true freshman Maya Moore scored the first 15 points for the Huskies. She hit everything she shot. When she missed for the first time the crowd cheered as if we had scored a basket. With about 11 minutes left in the Irish were tied with UConn. During a timeout I was talking with the people about how unlikely this game was turning out. I wondered if I could see three great games in two days. What I ended up seeing was Notre Dame not hitting a field goal for the rest of the half, and UConn taking control of the game. The Irish had a couple of chances to get the game within 10 in the second half, but UConn would then just pull away again. They ended up winning 81-64. The Notre Dame crowd was loud, but UConn has proven once again how good they can be.

A panoramic of the fans storming the court at Mackey

The final score from the court

I think that is all that I can put in a title before it becomes too big. Today was a great game at Mackey Arena. The Badgers of Wisconsin came in ranked #11 and cocky as hell just like always. This was probably the biggest game on this campus since 2004 when the Badger football team came in here and handed our football team a loss that has sent the program into a tailspin. Today we exercised some of those demons. We won 60-56 on the backs of our young players. E’Twaun Moore scored 16 points to lead the Boilermakers. He gets my player of the game, and the picture above. He made some key shots throughout the game. Robbie Hummel had another big game. He may not always show it on the boxscore, but he impacts the game by his defense and his hustle. The last three weeks have been progressively better games. Every one has topped the last one as the best game I have seen in Mackey. The crowd was so loud today that my ears were ringing. I loved every minute of it. I watched the replay of the game down here, and the TV does not do it justice. This is a young team, and hopefully the first of many big wins on this floor.
The win was especially sweet today because of the hard times that the program has been through lately. The fans stormed the court for the first time since 1992. I came from my old mans section to get down on the floor. I figured when else am I going to be able to do this? I wanted a picture of the scoreboard from the floor level. I put that picture up above as well. I had so many good pictures today that I couldn’t just pick one to put up top. I also put one up that I made of the fans storming the court. I tried to make a panoramic of the historic rush. It is pretty good, but you can see some ghost students on it.
Purdue is now tied for second place in the Big Ten, and will play Iowa on Wednesday. I was thinking before the game about how far I have come along since my high school days. Before the game I was actually happy to see that IU lost. The transformation is almost complete. I have to get back down here for that to see the school I graduated from play the pro team of the state that I used to live in. I want to see us crush Iowa. Boiler Up!

I feel sorry for the fans that braved the weather yesterday to watch the Packers play the way that they did. They let the Giants run all over them. I did not want to believe what I was watching, but Favre actually looked like the weather was bothering him to the point where he was not effective. I even heard “put Rodgers in” from a die hard Favre supporter. That game was very hard to take. Maybe it is because we are near the end of the Favre era, and every chance to get to a Super Bowl is a big one. There is always next year, but today it hurts too bad to even think about next year. I raced home from Purdue to be able to watch the game, and I wish that I had missed it.

The Purdue women are having a tough season. I have been saying all along that it is harder to watch this then what the men went through because the effort just does not seem to be there. That was never more evident then last Monday night against the Hoosiers. I will not name names, but some of the players just did not seem to be giving everything that they could. During the week they went to Penn State and won based on effort. Coach Versyp did not put her usual starting five on the floor. She started the players that earned a start in practice. Yesterday she did the same thing. It seemed to fire up the Boilers. Two of the players that were benched in that game had good days yesterday. Natasha Bogdonova had 13 points to go along with 13 rebounds. Kiki Freeman chipped in 10 points. The Boilers won 52-38 in front of a busy Mackey Arena crowd. It was National Women in Sports Day, and bus loads of kids were in the arena. The Boilers did not look like a title team, but they did look like a team that wanted to win. Even when shots were going in and out they were still giving the effort. If they keep this up the rest of the season they will make me happy by playing in front of a home crowd to begin the women’s tournament. This coach is taking a team decimated by injuries and turmoil and making them into winners. Teams next year better look out.

That is probably not what Illinois coach Bruce Weber is saying, but I would bet he is thinking that after today’s game against the Boilers. Purdue played another great game today in Mackey Arena. They went into the half down by eight points, but went on a 20-3 run midway through the second half to win 74-67. Keaton Grant led all scorers with 22. A lot of those points came on free throws at the end of the game. The Boilers played great as a team today. Robbie Hummel and Nemanja Calasan played great on both ends of the floor today. They both had big plays that sent the packed Mackey crowd hysterical. These last two home games have been great because of the crowd. They have really been into the game, and have me excited for the rest of the season. Purdue is now 4-1 in the Big Ten, and looking like a team on the move. Illinois moves to 1-5 in the Big Ten. The next home game for the Boilers is next Saturday against Wisconsin. I will try my hardest to make it down here to see the game. These guys are exciting to watch.
On a side note Michael Jordan’s son Jeffery got into the game today for the Illini. He is a walk on freshman, but walked away from the game with 5 points. He missed his first shot, but got on the board with an easy layup towards the end of the game. With about 20 seconds left he brought the ball up the court and hit a tough three pointer over a couple of Boilers. He may just be a walk on, but I have a feeling that we will see a lot more of him in the future.