Here are some pictures from the last home game this season for the Boilers. Going into the game you had the feeling that it was the end of an era. Today that was confirmed when it was announced that Danny Hope would no longer be Purdue’s head football coach. I will have more on that later. What is important here is that we retained the bucket, and did it with a very good display of offense. I was lucky enough to be on the field at the end of the game so I tried to include a few celebratory shots here as well. A bittersweet day to be a fan for sure. 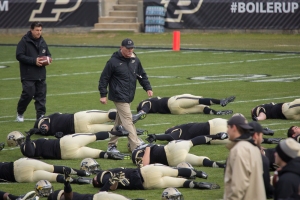 Coach Hope surveys his troops for the last time

Coach Wilson and Coach Hope meet at midfield prior to the game. Imagine what their conversation was about

The best damn band in the land takes the field

The team overtakes the special as they come out

Coach Hope with Antwon Higgs during the National Anthem

Antwon HIggs with a rally cry during the opening kick 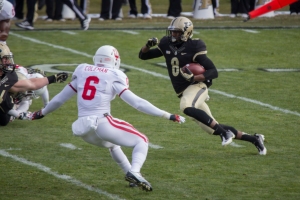 Raheem Mostert with a big run. It was nice seeing him back on kicks again yesterday

Akeem Shavers with a nice run

Antwon Higgs getting pumped up during a tv timeout

Indiana had some good moments too as you can see here 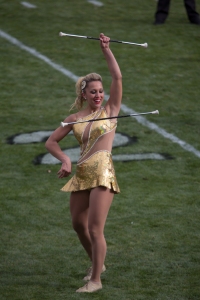 The Golden Girl twirling at the half 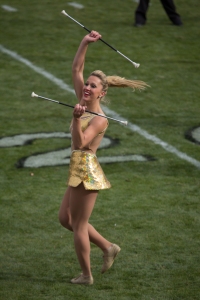 The Golden Girl twirling at the half again 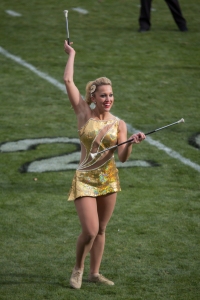 The Golden Girl twirling at the half yet again

Robert Marve congratulating O.J. Ross on a nice run after catch for a touchdown 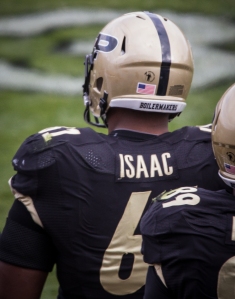 Ryan Isaac on the sidelines. I really wanted a shot of the Neil Armstrong sticker that the team wears on its helmet 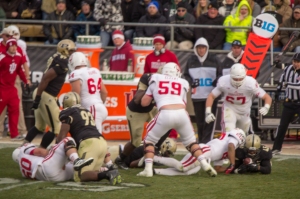 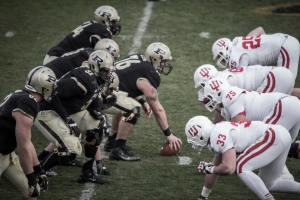 The line of battle 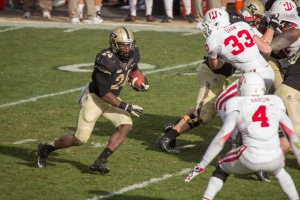 Akeem Shavers with the ball yet again

Another shot of the line of scrimmage 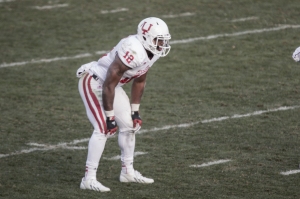 The team takes the bucket to the fans

The fans, BJ Gaston, and the bucket

Another shot of the students and the bucket

Crosby Wright sees that Purdue has its bowl ticket punched

Since I was in town I decided to attend the finale of the Boilers series against Indiana. I was not disappointed as they won in a rout 14-5. This was the first series sweep for the Boilers of the Hoosiers since 1997. It is pretty nice to be on the right side of history like that. It was also the 30th win of the season for Purdue. More importantly it kept the Boilers in a tie for first place in the Big Ten with Michigan State. Both teams will square off next weekend in East Lansing in what should be a great showdown. Even with the high price of gas I may have to try and get to at least one of those games.

Today was another game in which the wind played a factor, but in a different way. Instead of blowing in, it was blowing out to left field. If you could get the ball in the air it had a shot at going out. Once again the strong wind made for some interesting plays in the field. The players were battling the sun and the wind, and it was not always pretty how it turned out.

END_OF_DOCUMENT_TOKEN_TO_BE_REPLACED 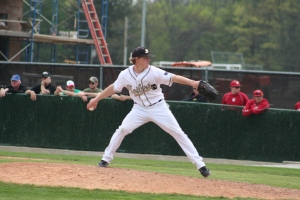 Yesterday I was in West Lafayette to see Purdue get the win over Indiana 6-2 to win the series with the Hoosiers as well as keep them in a first place tie with Michigan State. I know that this post is late, but that is part of the fun of having a blog. I really have no deadlines. I stayed in West Lafayette, and did not have time for a post last night.

I was excited about seeing Purdue play after the game near me in Valpo was washed out Tuesday. They have been playing really well, and they are worth the price of admission. The game against Valpo would have been a good one with both teams at the top of their respective leagues. That did not happen though so I decided to take in a game against the Hoosiers. Purdue playing Indiana in any sport is fun to watch. The rivalry brings out the best (or worst) in the fans and players. The stakes are the same as any other Big Ten game, but it just feels much bigger. Over the course of this school year I saw the football and basketball teams take on the Hoosiers, so why not in baseball? END_OF_DOCUMENT_TOKEN_TO_BE_REPLACED

Finally! Here are the pictures from Tuesday night. Until today I did not know if I even had any good ones. I don’t know how many are good, but here are a few that interested me.

END_OF_DOCUMENT_TOKEN_TO_BE_REPLACED

Last night the Boilers had an off night, but still came away with the 67-53 win over Indiana. The win was important for many reasons. One of them is that it is IU. Anytime you win against them in any sport it is big. The second is that it was JaJuan Johnson’s 22nd birthday. You like to see the big guy win on his birthday. The best feature of the win though is the fact that it was the 100th win for E’Twaun Moore and JJ in a Purdue uniform. It was a great game that I was glad to see.  END_OF_DOCUMENT_TOKEN_TO_BE_REPLACED

The Paint Crew with a subtle reminder in 2009

In just a few hours I will be down in West Lafayette to see the first of two games this year featuring Purdue and Indiana. This is a storied rivalry that really picked up steam during the Gene Keady and Bobby Knight years. As a Purdue fan I know that I am supposed to hate Bobby Knight, but I actually think that he was a good coach. At the end he started to lose it a little, but his first two decades in Bloomington were pretty good. END_OF_DOCUMENT_TOKEN_TO_BE_REPLACED

Confessions of a Sports Junkie
Blog at WordPress.com.