Ever since Purdue won in Bloomington to claim the bucket again I have heard many different bowl scenarios for the Boilers. For very selfish reasons I was rooting to see them in Detroit. With starting a new job it would have been very hard to get anywhere else. For the most part though Purdue was not even mentioned with that bowl in the last week. From everything that I have read it looked like the team was going to be in Dallas. Reading as much about Kennedy that I have it would have killed me not to go to that one, and make a couple day trip out of it. Instead though another trip to Detroit appears to be in order. I do live almost two hours further away now, but I think that I may have to make this game. This is the first year since 2004 that I have not seen Purdue play on the road. Thankfully a short drive into Michigan is all that stands in front of me from keeping that streak going. END_OF_DOCUMENT_TOKEN_TO_BE_REPLACED

Tonight a group of us took advantage of the ticket deal and went to the Purdue game that was not originally on the schedule at the beginning of the year. The opponent was Western Michigan, and with the holiday tomorrow many people did not come out to the game. They missed out. Last year during the Michigan State game I snapped a picture just as Lewis Jackson was attempting a slam. He did not get it down, but it left everyone wondering what if. Just this week I saw some talk about whether or not LewJack could still slam. On a break in the second half he showed everyone just what he could do. He soared high enough to put down a nasty dunk. I really wish that the students were in the arena and the stands were packed. Maybe I should be happy that the stadium was only half full. I might not be able to hear right now had the place been packed. It was the highlight of the night for sure, and maybe of the non conference schedule. Instead of rambling anymore I will just post some pictures from tonight’s game. 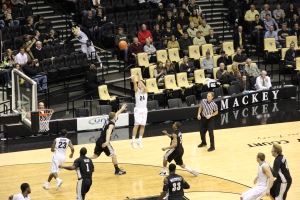