As you can see in the above video I completely lost my mind when the Sox clinched the Series in 2005. I was sitting in the United Center watching the game with some great people who made the night awesome! It is funny to look back at it now with how Juan Uribe is helping the Giants to the Series. Juan made a great play at the start of the video going into the stands for the second out, and then used his cannon to record the final out. END_OF_DOCUMENT_TOKEN_TO_BE_REPLACED

This year marks the 25th year that I have been attending Major League Baseball games. At first my attendance was sparse. I went when my father got free tickets from his company. We all know now that I will go whenever I can get a chance. I love lists. Lists are how you can look at things. So as this season progresses I will have a few lists on here. The first of those will be my goal sheet for this 25th anniversary season. Here are the things that I would like to accomplish during the 2010 season. Some of them have already been checked off. Some of them might take some work to get done. I will have to look at this at the end of the year to see how I fared. Here is the list:

If I can do all of this I would have to say that I will have had a great year. We will see what happens over the course of the season 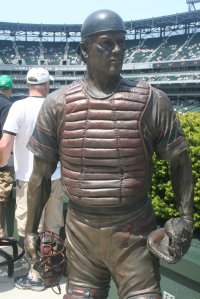 Tonight in Texas when the game became official Ivan Rodriguez passed Bob Boone to move into a tie for most games caught in a career with Carlton Fisk. It is nice for Rodriguez that he would tie the record, and possibly break it tomorrow where he played a large portion of his career, in Arlington. He played his first 12 seasons there, and it is fortuitous that he would come back with the Astros at this time to get the record. He is scheduled to catch tomorrow, and when the fifth rolls around he will get credit for having caught his 2,227th career game moving him into first all by himself. The records that Fisk set in his career are falling more and more everyday.
One thing that Ivan better watch out though. There is a reason that Fisk only caught one more game than Boone. The White Sox released him as soon as the record was his. It was not until much later that the Sox and Fisk mended that fence. I think Rodriguez will be around a little longer though. When Rodriguez hangs up his spikes for good the countdown will begin to when we will see both Pudges’ in the Hall of Fame.
http://csd72.blogspot.com/feeds/posts/default?alt=rss