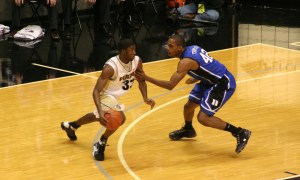 Tonight the Boilers won the Paradise Jam by a single point 73-72. It was a hard fought game that neither team deserved to lose. Thankfully though the Boilermakers won. As the game was winding down the highlight had to be Matt Painter and Bruce Pearl exchanging words. Pearl kept on ranting and raving at the officials and anyone else who would listen to him. Fox Sports Net must have put a mic closer to him because he was much more audible as the game was ending. E’Twaun Moore was as great in the second half as he was in the first. He won the tournament MVP, and his 22 points were huge tonight. JaJuan Johnson was in foul trouble all game long, and eventually fouled out. Wayne Chism was a beast for the Vols scoring 24 points. Kelsey Barlow had only two points, but he had five rebounds, four assists, and only two turnovers. His two missed free throws at the end could have spelled the end for Purdue. The Vols missed a wild three though, and Barlow picked up the rebound to seal the victory. He is growing as a player right in front of our eyes. Hummel had another solid night as usual for the Boilers. He missed a key free throw with 32 seconds left that would have given Purdue a four point lead. He quickly sank the second to give them a three point lead though. His 20 points and eight rebounds were key for Purdue tonight. This was a great game, and should give the team some momentum. This will help the team as much as the loss last year to Oklahoma may have hurt them. It gives them the confidence that they can play with anyone.

Next up for the Boilers are the Chippewas from Central Michigan early Saturday morning. Hopefully we can see the team that stepped it up tonight.

The first half of tonights game was dominated by the referees. The start of the game was very frantic with both teams playing a little rough. Two minutes into the game Purdue was ahead 1-0. The Vols then went on a 7-0 run in the next minute to get an early lead. By the first TV timeout Purdue had tied the game at seven. The Boilers took the lead on a great ally oop pass from Barlow to Johnson. On the other end of the floor Johnson picked up his 2nd foul and had to sit down. Bade picked up three quick fouls to get Johnson back on the floor. At that point of the half it seemed as if Purdue was getting jobbed on the fouls. They were getting hammered on one end, and getting called for cheap fouls on the other. The refs started to even things up after this.

The cameras picked on interesting exchange during the half. Kelsey Barlow picked up his second foul on a reach in call and started arguing with the referee. Painter told the young kid something to the effect of ‘you have only four college games under your belt.’ At the next chance he was pulled from the game. Painter really lets these kids know that they are not bigger than the game. Hummel had five points in about ten seconds of game time. He hit two free throws to tie the game, and then hit a quick three after Keaton Grant stole the inbounds pass. He was cold in the first half, but played well all around. He finished the half with 11 points. With 3:30 left in the half Barlow then commits his third foul. He has played well when in the game, but has been very aggressive so far. Moore made a nice spinning layup at the end of the half to give Purdue the lead. With Johnson out and Hummel struggling a bit Moore picked up the slack for the Boilers in this first half. At the break the score is 42-41 Purdue. Moore has 15 points at the half. When he wants to he can take a game over. Wayne Chism has to be the player of the first half for the Vols. He scored 14 points, and drew a lot of fouls on Purdue’s big men. This game will be decided by the benches. With all of the fouls being called I think a lot of players will be sitting in the second half. This has been a great game so far. I hope that the second half will be as exciting.