It has been over a year since I attended my last Major League games. This past Saturday I took care of that in style. I attended the rare doubleheader in Chicago. The Cubs played the noon game, and the White Sox played a six o’clock game. This has been something that I have wanted to do for a while now, and Saturday I got my chance. We had good seats for the Cubs game that gave me a good vantage point to try out my new lens that I have been renting. For the first game of the year it was a good one. The Cubs and Rockies traded the lead until the Rockies finally prevailed. On a hot day it was a nice quick game that let us get on the ‘L’ for stop two on the day. During the Sox game the heat started getting to me so I moved up from our seats in row one for a while. When I got back so did the Sox offense, and they completed the perfect day by coming back to beat the Mariners. Fireworks closed out a great sports day. I have seen more than 18 innings in one game. I saw the 19 inning game in 2006 between the White Sox and Red Sox. In 2003 in a doubleheader at Wrigley we watched 24 innings. I have seen more in one day, but never at two parks. That was a great experience that I would like to try again.

I have not been posting much on here as I have shifted my interest a bit. I have a blog called csd’s Daily Photo where I have to take a picture a day for a year. You can find that blog here. Some of that content is sports related, but of a high school variety that I didn’t think needed to be repeated here. Purdue cranks up the football season Saturday, and the blog will be back then. I think that I will go back to the original format at that time. I will just talk about my experience, and leave the analysis to the pros.

Here are a few pictures from both games Saturday that I liked. 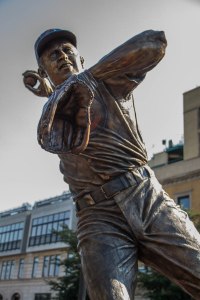 Former Cub Tyler Colvin shares a laugh prior to the game 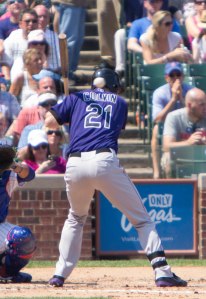 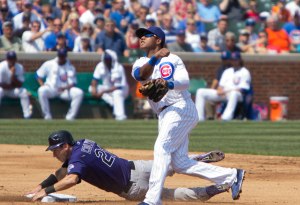 The fractured bat of Anthony Rizzo rests in the outfield grass

Another tight play at second base

I finally got to see Kevin Youkilis in his other Sox 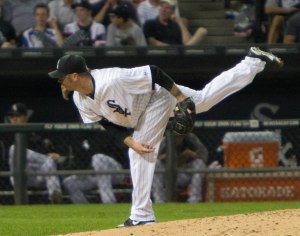 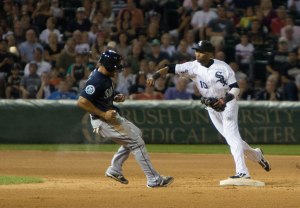 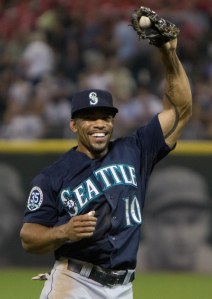 Eric Thames having some fun with the crowd

Kevin Youkilis makes the final out near the Sox dugout

High fives all around for a job well done

It is a good thing that I am not a respectable site because waiting two days to post these pictures would not normally be a good thing. Being a blog though I can kind of do things on my own schedule. I was going to bypass this gallery, but I had a couple pictures that I wanted to show. I threw a couple more in just for good measure. Looking at these pictures with the sun and short sleeves it is hard to believe the last time I was in Wrigley was for a cold football game. At least no rules were changed just prior to the game Wednesday. They still both hit facing the scoreboard. Here are the pictures from Tuesdays game: 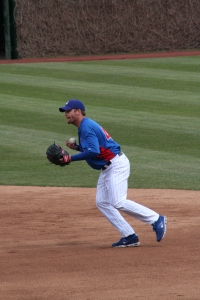 Ryan Dempster was taking a lot of grounders at second during batting practice. Could he be the next Cub second baseman?

END_OF_DOCUMENT_TOKEN_TO_BE_REPLACED

My view from section 126

For those of you who don’t read this blog very often I am not the biggest Cubs fan. I won’t say that I hate them, but I don’t love them either. I have been to seven games over the past two years, and the Cubs have won six of them. They just seem to play better when I am in the park. I think the Cubs should pay me to attend their games. The way it looked at the stadium today they may have to start paying people to attend them period. The announced attendance was 27,039 for the game. Most of those people must have gotten their Starlin Castro bobbleheads, and turned around and left. If the park was well over half full you could have fooled me. I found a great seat cheap last night, and decided to go. Down low in section 100 you would not expect to find a lot of empty seats. That was exactly what happened though. As the game went on people just spread out to have some room for themselves. This reminded me of a game at the Cove on any night other than dollar night. This is not what I have come to expect going to Wrigley. On my way into the stadium I saw people with bleachers seats by the dozens trying to get rid of them. For $10 a seat you can’t beat an afternoon of entertainment. If that trend continues I might have to take the train up to Wrigley a little more often. I have seen where people are saying that the cold kept people away. Today it was mostly sunny, and almost 50 degrees. What more do you want in April? If the Cubs get hot seats won’t stay empty. If they don’t play well though it will be interesting to see what the fans do. END_OF_DOCUMENT_TOKEN_TO_BE_REPLACED

Here are the pictures that I took during the game Saturday in Wrigley Field. Of course most of the action was going away from me, but what can you do?

END_OF_DOCUMENT_TOKEN_TO_BE_REPLACED

Here are the pictures that I took before the game in Chicago yesterday. The atmosphere outside of Wrigley was awesome. I tried to get some pictures from different places around the stadium.

END_OF_DOCUMENT_TOKEN_TO_BE_REPLACED

Growing up around Chicago in the 80’s it was hard not to appreciate what Andre Dawson was doing on the North Side. He really played the game the right way. He played through pain, and also helped make the Cubs respectable again. Before the announcement was made this winter I had a blast reading Hawk to the Hall a website that everyday had more reasons for Andre to be inducted.  The Hawk may have had borderline numbers, but his work ethic and what he brought to the game should have made up for that. He should have already been in the Hall, but I bet he has forgotten all about that as today unfolded. END_OF_DOCUMENT_TOKEN_TO_BE_REPLACED