Homecoming was truly a special day for the Boilers this year. We had the ailing Wildcats in town to play in the football game, and Neil Armstrong was back on campus to help dedicate the building that bears his name. Purdue won the game 35-17, but the game was in doubt until the fourth quarter. Neil Armstrong poked his head out of the press box and led the singing of shout. I normally do not like this new tradition, but yesterday it was one of the highlights of the day. The crowd was waiting to see if he would be the guest conductor, and gave him a huge ovation when he did come out. The energy from that moment seemed to move to the field. The Boilers took control of the game from that point on. The picture above was an obvious touchdown for the Boilers that was not called. Even after a review the ball was spotted on the one. The Boilers ended up punching it in with a Jeff Lindsay touchdown catch. On a side note the Boilers looked a lot better today with Jaycen Taylor back in the lineup. Even with bum arm in a cast he provided a fire to the offense. It will be good to see him spark this offense for the rest of the year.

Two years ago today I was sitting in the United Center watching the White Sox win the World Series. That team was amazing to watch as was the 2006 squad. They were never out of a game. Watching the video I took of the clinching moment when Uribe threw to Konerko still gives me chills. I only hope that I can experience that thrill again. 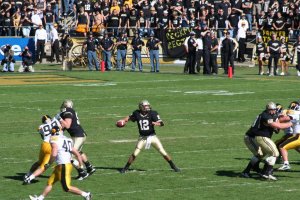 After the way the last three years have gone watching these Iowa – Purdue games including the 30 point margin last year today was sweet. We had good game against the team that knocked Illinois from the unbeaten last week. Once again the Purdue defense looked good. They did not get beat late today because they were able to rest while the offense was on the field. The offense looked better than it had the last 2.5 games. Dorien Bryant played like the player that he claims to be today. He caught nine passes for a career high 167 yards. Curtis Painter also had a good game throwing for 315 yards and three touchdowns. He had one interception on an athletic play by one of Iowa’s linebackers. Purdue is now 6-2 and is bowl eligible for the 10th time in Tiller’s 11 years as head coach. The also get back to .500 in the Big Ten (2-2). Next up is Northwestern who is struggling this year. Looking at the teams it should be an easy win on homecoming.

In other games: Grand Valley won its 35th straight game to take sole ownership of the D2 win streak record. Notre Dame loses 38 – 0 to USC. The green jerseys that were worn to honor the 1977 championship team did not honor anybody.

I left the stadium in Mishawaka with the same feeling in my gut that I had 14 years ago. LaPorte had the game in hand, but Mishawaka scored a touchdown with 17.8 seconds to go in the game to win it. We had Mishawaka pinned deep with about a minute left, and I could hear people talking about our matchup with Penn next week. We let Mishawaka get to midfield, and then the madness happened. On a 4th and 3 play Mishawaka went 43 yards to win the game. We got the ball back, but could not complete a pass. If we could have shown some imagination on offense we might not have been in that spot. We had a couple of plays out of the ordinary and they worked. Other than that it was run on 1st down, run on 2nd down, run on most 3rd downs (draw). We were a very predictable offense that was easy to defend. When we did pass on third down we put a young kid in a bad situation. What the offense lacked tonight in terms of play calling was made up for by the defense. They took control of the game in the second half and made a win possible. Bryan Willis was all over the field tonight. That includes the sideline for some reason on the final two plays. He played his guts out, and we will be happy to see him back next year. Jawaun Marshall also had a great game going both ways. He made some plays at safety tonight that had me wondering where he had been all year. He was a playmaker that we could have used in a couple close games.

The kids who played their last game tonight are in agony. It is a feeling that I know all too well. They are at rock bottom right now on the bus ride home. It will take some time to pass, but they will leave LaPorte knowing that they were part of the best Slicer football team to take the field. Teams have been fielded by the high school since 1901, and no team played like last years team did. This team did not have a chance. They followed a Cinderella story. I saw a lot of kids not wanting to quit tonight. I saw men fighting to play another week. As they have all year long, the breaks just did not go their way tonight. I wish these guys nothing but the best, and look forward to seeing them in the stands in the years to come. Come sit up next to the press box with us and watch the draw on third and long.

14 years ago I went to Mishawaka as part of a team that was heavily favored to beat the Cavemen in the first round of sectionals. It took a bunch of great plays to get us close, but ultimately a dropped pass cost us the game. That night is still painful to this day. Two years later another Slicer team went to Mishawaka and lost in the first round. This year we have another Slicer team going to Mishawaka in the first round of the playoffs. A lot of these kids were part of the beatdown we gave Mishawaka last year in the first round of the playoffs. That was a much different team then the one that went to Mishawaka on a Saturday this year and was creamed 34-0. I cannot get a handle on this years team. Every time I think that they will win they lose, and when I think that they will lose they win. So based on that fact I will predict that the Slicers will lose 28-27 to the Cavemen. We will score late in the game to get within one, but lose it on a failed two point conversion. I will be there for the first time since I ended my career there rooting this team on. Good luck boys!

Here we go again. I have been to the last three meetings between these two schools, and have been on the losing end every time. The first of those three was in 2004. I was living in Iowa and made the trip to Iowa City to see the Boilers play. It was a beautiful day, but the Boilers just could not get things going. They were within reach most of the day, but never could get the offense going enough to take the game. Kirsch played in place of the injured Orton, and played like he usually played. The next year in Ross-Aide stadium the Boilers were within range yet again, but a key Kirsch interception in the end zone sealed their fate. Last year I was not going to go to the game, but I was given two free tickets to go. The Boilers were never in the game, and made it a long ride home. The only game in the series that I have seen the Boilers win was on Halloween in 1998. My friends and I put a fake mole on our faces in order to look more like Drew Brees. We watched him throw for 4 touchdowns that day. Two of those were to Tim Stratton as the Boilers rolled 36-14. Let’s get some of that back on Saturday. I have no idea who to pick in this one. Will the Boilers be ready to play? Who will be at running back for Purdue? Was the Illinois game a fluke, or the real Hawkeye team? I am just going to guess and say that Purdue will win 24-17. There are just too many questions on both sides for me to make a good prediction.