During the football season I had a post called game notes every week for whatever game I was attending. Since Purdue is not in a bowl this year I will put out the game notes for games that I won’t be attending. I wanted to post this to finalize my picks for the regular season. I have a sheet of paper with my picks that has just been sitting around for almost a month. It is time to get rid of that paper. I won’t dwell too much on the season in this post. I plan to look back on the Purdue season when the sting from the loss to Indiana wears off. For now let’s just see how I did with my picks this season. END_OF_DOCUMENT_TOKEN_TO_BE_REPLACED 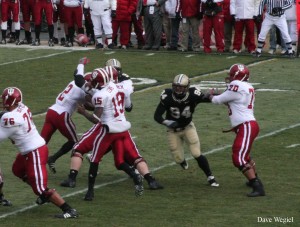 Ryan Kerrigan closing in on the quarterback two years ago

This will likely be my final football game of the year. With Purdue not going to a bowl (unless they allow a 5-7 team into the Little Caesar’s Bowl) I do not have a football game on the schedule in the near future. That seems kind of weird. i love football, and the season is just about over. It seems like it was just September and I had a lot of optimism heading into the Notre Dame game. I even picked the Boilers to win that one. I have made that mistake multiple times since. Early in the season the Boilers were 4-2, and needing just two wins to make a bowl. Well they have not won a game since then, and the bowl hope is now gone. Indiana started the season 3-0,  and have only managed one win since. This game could have been a bowl showdown, but it is not. Who knows how many people will even show up to it? The students will be on Thanksgiving break, and many people are traveling for the holidays. To make matters worse the basketball team who is ranked in the top ten in the country has a game at night in Chicago.  END_OF_DOCUMENT_TOKEN_TO_BE_REPLACED

The normal red marquee will be purple this Saturday

The people have spoken and I will be going to Wrigley Field this Saturday to see football played at the historic grounds. Here is how the vote went down:

I think that some felt pity on me, and did not want to see yet another road trip to a Purdue game only to see them get throttled. Early in the season this was the trip I was going to make as I have not seen a football game in East Lansing yet. As the injuries piled up though I decided now may not be the time. Instead I will head to Wrigley Field to see what I think is one of the most unique football games this season. Normally this is where I would make a joke about college football being played at a Minor League stadium, but I am above that this week. Football is not new to Wrigley field. The Bears played over 365 regular season games in the friendly confines. Until 2003 Wrigley had hosted more professional football games than any other stadium. The last time football was played in Wrigley was in 1970 though. You have to go way back to 1938 to find the last college football game played in Wrigley. That game featured Depaul up against St. Louis. Of course neither of those two schools even has a football program now.  END_OF_DOCUMENT_TOKEN_TO_BE_REPLACED

Once again a busy week has prevented me from putting together the wrap that I had started. This is more to get my picks from last week out of the way so that this week’s preview can be a little shorter. Purdue pulled off the upset of Wisconsin if you only count first half scores, or scores not associated with turnovers. Of course both of those count so the Boilers still need two wins to become bowl eligible. Last week I talked about how this week’s picks would bring me to 100 on the season. I went 7-3 for the week to bring me to 82-18. I can even do that math being an OLS major. Each week I feel that I have been doing okay, but I would like to be a bit higher than 82%. That being said I have not been slacking when it comes to picking the games outside of the Big Ten Conference. Two of my losses last week were in tough SEC games. I guess I have to do a bit more homework before I do my picks. Of course a little luck would not hurt. Here is how I did last week (as usual the actual score is in parenthesis): END_OF_DOCUMENT_TOKEN_TO_BE_REPLACED

This week is busy with a basketball game thrown into the mix so this wrap will be short. I will just talk a little about my picks from last week, and then move on to other things. I have already covered the Purdue game enough. No more really needs to be said about that. The first game that shocked me was the Michigan State game at Iowa. END_OF_DOCUMENT_TOKEN_TO_BE_REPLACED

Once again I am back to offer up some thoughts on the games that I did not see in person last week. Through the magic of DVR I was able to watch a few games from around the country. As usual here are my thoughts on the week that was: