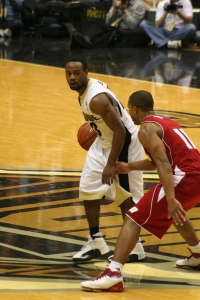 Lewis Jackson will be key this week again

During football season I actually break down games, and talk about keys to winning. For some reason during basketball season I just ramble for a couple of paragraphs and then make some picks. That may be due to my lack of basketball knowledge. I just don’t know near as much about hoops as I do football. What I do know though is that tomorrow will be a huge day on the campus of Purdue.

The day starts off with the #11 Boilermakers taking on #3 Ohio State in the men’s game. This game is huge for the Boilers. If they win they still have a chance at the Big Ten regular season title. A win would put them 1 game back. A loss would put them three games back, and sew up the title for Ohio State. The Buckeyes come into the game having only lost once so far this season. This will be a tough game for the Boilers. They have to shoot better than they did in Columbus earlier this season. It seemed as if Purdue would come down, shoot, and the Ohio State would get the rebound. I was sick and missed most of the game. Once I saw the outcome I decided that it was not worth watching. I think that the Boilers can win this game. This is not a homer pick. I just watched them take it to the #10 team in the country Wednesday night. Of course JJ and E’Twaun need to be huge. That will be the case the rest of the season. Lewis Jackson has been a big factor of late, and it would not hurt for him to bring it again. Kelsey Barlow and Ryne Smith were missing on offense Wednesday night. Barlow made a couple shots late, but really was not a factor. Both of these guys play great defense even when the offense is not working. Some offense tomorrow would be nice though. The Boilers have gotten payback once already this week over a top 10 team, so why not do it again? Mackey should be a madhouse tomorrow. If the crowd can keep it going I think the Boilers win. 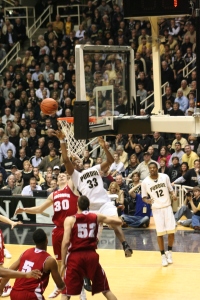 A blurry Moore with a shot against Wisconsin last week

As if you need anything else to get you pumped up for the game E’Twaun Moore is just 11 points away from hitting 2,000 for his career. That is a special number. Only four players in Purdue history have hit 2,000, and the last one was in 1988. Only 26 Big Ten players have eclipsed that mark. I would love to see the fifth player in Purdue history, and the 27th player in Big Ten history make history by halftime. It would be nice to see him get this in front of the home crowd. Eleven points seems like a small number for Smooge, but he is so unselfish that it is not a forgone conclusion that he gets it tomorrow. He may have had the quietest run to 2,000 of anyone. Until this season I am not sure too may knew his name outside the Big Ten. In fact after watching some early season games they still didn’t this season. He is a special player for sure.

A couple of hours later the Purdue women will face Ohio State. This is not the matchup that we thought we were going to see earlier in the season. Looking at the record I guess Purdue is not too far off what I thought they would be. I was hoping they would be near the top of the Big Ten, and they have. Ohio State has not performed to expectations at all. They have really struggled this season with the same players that have brought home the Big Ten title the last couple of years. Something has gone wrong in Columbus, and the Buckeyes are a middle of the pack Big Ten team. Of course the middle is a log jam of teams that could end up in second place. The Buckeyes have played better of late. Much like the men the Purdue women were crushed when they played in Columbus. They have a chance at home tomorrow to get a big win. They have really been playing well lately, and especially at home. I think the women will win to pull off the Buckeye sweep on the day. Normally this would be a sad day for the women. It is the last home game of the season, and usually we are saying goodbye to some players. This team has no seniors though so we will just be seeing them for the last time at home this season.

On a side note if you have the time former Purdue player and assistant coach Cuonzo Martin will be coaching tonight in Valpo. The matchup is courtesy of the ESPN Bracketbusters series. Normally I would be all over that game since I already have a ticket as part of the Purdue package. I am not sure right now though. I am already in West Lafayette so it is a little longer drive.

Before I get to my picks let me just talk a little about this weird feeling I had yesterday. As I was packing to come down to West Lafayette I grabbed the tickets I would need off my desk. I have a little pile that is huge in October when the tickets come out. I have the remaining football tickets and both the men’s and women’s basketball season tickets in the stack sorted by date. When I grabbed my tickets yesterday I saw that the only game remaining was the last game at home for E’Twaun and JaJuan. The season is winding down very quickly, and we only have two chances to see JJ and Smooge at home. You can travel to see them in Indy or at the NCAA Tournament, but it is just not the same. Enjoy your last two games with these great players.

Men’s Picks of the Week – Last week I went 12-1. My lone loss was the Thursday night game when Minnesota dropped one to Penn State. I will take 12-1 every week though. My overall record on the season is 135-32. I am over 100 games over .500 so I can’t be mad about that. With my past of picking games I think that if you told me I would be here I would have taken it. Here are this weeks picks:

Women’s Picks of the Week – Last week I went 9-2 for the second week in a row. What is going on? Two straight weeks that I was not fighting for a .500 record. My overall record is now 107-54. I will have to really pick it up to get 100 games over .500 like I did with the men. I think I will have to start picking more games or I won’t do it. What felt even better was the fact that I picked the Boilers to win twice, and they did. I love it when I can do that. Here are this week’s games: