Courtney Moses with the ball in the first half

Last night the Purdue women lost a heartbreaker 68-66 to Wisconsin in their Big Ten opener. What made the win so historical was the fact that Wisconsin had not won in Mackey since 1984. Yes you read that right 1984. It seems that I have seen lots of Purdue history lately, but all on the wrong side. Helping Wisconsin to that win was their 11 three pointers which tied for the most all-time in Badger history. More history I saw on the wrong side of. END_OF_DOCUMENT_TOKEN_TO_BE_REPLACED

Since shortly after Nebraska joined the Big Ten we knew that there would be two divisions. We also knew what teams were in each division. One thing that we didn’t know though was the name of each division. Today the names were announced at a press conference held at noon. Since I was snowed in with the authorities writing tickets for being on the road I had nothing better to do than to watch the press conference and then post about it. The announcement did not seem to go over too well through the few people I saw comment about it via the social networks. I think that over time people will get used to some of these ideas. After the Wrigley debacle though they had to be nervous about how the public would take this decision. No new rule changes were announced during the half hour show. So far all games next season will feature teams switching sids at the quarters and playing both ways. END_OF_DOCUMENT_TOKEN_TO_BE_REPLACED 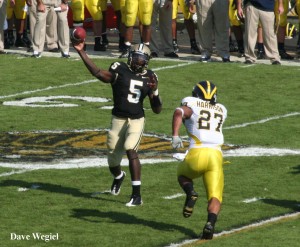 The player that must have haunted Rich Rodriguez for two years

So this is it. The Boilers have three games left with two wins needed to become bowl eligible. They go to Michigan State next weekend so I think that they will have to take care of Michigan this week along with beating the Hoosiers to get their two wins. There is also the chance that they finish out 0-3. I think that the events of this weekend will go a long way in determining how the rest of the season goes.  END_OF_DOCUMENT_TOKEN_TO_BE_REPLACED

Once again a busy week has prevented me from putting together the wrap that I had started. This is more to get my picks from last week out of the way so that this week’s preview can be a little shorter. Purdue pulled off the upset of Wisconsin if you only count first half scores, or scores not associated with turnovers. Of course both of those count so the Boilers still need two wins to become bowl eligible. Last week I talked about how this week’s picks would bring me to 100 on the season. I went 7-3 for the week to bring me to 82-18. I can even do that math being an OLS major. Each week I feel that I have been doing okay, but I would like to be a bit higher than 82%. That being said I have not been slacking when it comes to picking the games outside of the Big Ten Conference. Two of my losses last week were in tough SEC games. I guess I have to do a bit more homework before I do my picks. Of course a little luck would not hurt. Here is how I did last week (as usual the actual score is in parenthesis): END_OF_DOCUMENT_TOKEN_TO_BE_REPLACED

Chief Illiniwek during his last football performance in 2006

This will be the second time that I have traveled to Champaign to see the Boilers play the Illini. The first was in 2006 when Joe Tiller’s group took advantage of turnovers to become bowl eligible. While reading the Illinois preview on Hammer and Rails I saw that Boiler T-Mill who does most of the writing had a 7-11 record following Purdue on the road. That got me thinking about my record following Purdue. I have seen Purdue on the road fifteen times so far. Of those fifteen times the Boilers have dropped ten of them. The worst loss by far had to be last season at Wisconsin when they went down 37-0. I am really glad that I sold my Ohio State tickets for last weekend because that would have been horrible to have seen in person. Here is a quick breakdown of my Purdue road trips by team: END_OF_DOCUMENT_TOKEN_TO_BE_REPLACED

Have you ever noticed that their are a lot of schools in Michigan that end in State? Grand Valley State takes on another state from their own state this weekend when they travel to Big Rapids to play the Ferris State Bulldogs. Before last weekend this was shaping up to be a huge game. Both teams were undefeated in the GLIAC North. The Bulldogs lost to Northern Michigan in the dome 22-20 though to take some of the luster off of the game. With about four minutes left in the game Northern Michigan kicked a field goal that gave Ferris their first loss in the GLIAC this season. As it is though if Ferris State wins they can still pull back even in the standings. This game is the season right now for Ferris State. This will be my first trip to Top Taggert Field. At one point in my life I almost attended Ferris State for all the wrong reasons, so this will be a cool trip to see the campus a little. In conjunction with the football game Saturday I will also be at the Ferris State hockey game that night against Ohio State (Another State team). I figured that I sold my Ohio State football tickets for Saturday against Purdue so I should at least see part of the Ohio State game and boo the hockey team. I will be against the Bulldogs in the afternoon, but I hope they can pull off the win at night.  END_OF_DOCUMENT_TOKEN_TO_BE_REPLACED

Error: Twitter did not respond. Please wait a few minutes and refresh this page.

Confessions of a Sports Junkie
Blog at WordPress.com.