Today the Purdue Baseball team did something that it had not done in 103 years. It won the Big Ten Baseball title. Actually it clinched at least a tie, but with four games left it seems like this team has the outright title in the bag. I was at the game today and snapped a few pictures. I will have a little more on the game, and a link to more pictures later. For now let’s just enjoy the spoils of victory. Boiler Up! 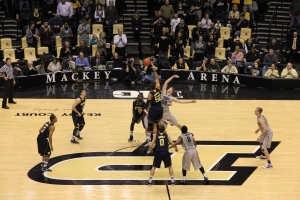 The tip of my first sporting event of 2012

This site is titled Confessions of a Sports Junkie. I really haven’t been feeling much like a sports junkie lately though. My last sporting event was in early December making it a nearly month and a half dry spell for me. Last night I received a text that asked if I wanted to see Purdue play Michigan tonight. I jumped at the chance. I have seen Michigan and Purdue play every year since moving back from Iowa. Purdue played a very good game against the #22 team in the country, but fell short 66-64. After a slow start to both halves Purdue had the game seemingly in control before letting it slip away. This would have been a nice win for Purdue, but the shots just didn’t fall at the end when they needed them to. Here are some photos from the game: 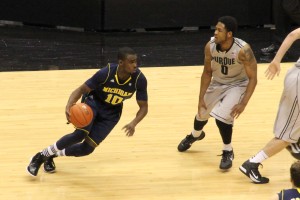 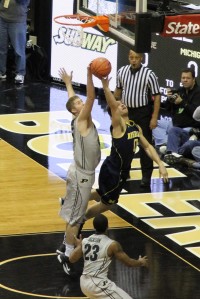 END_OF_DOCUMENT_TOKEN_TO_BE_REPLACED

The Boiler pitching staff had a great day today striking out fourteen Wolverines as the offense came alive to give them a 8-0 win to open the weekend series. I got to the game a little late today, but once I walked in it was well worth the drive down. I have been to a handful of games over the last couple of years, but it always seems as if Matt Morgan was pitching when I attended. Today was not any different. Matt struck out eight batters in his six innings of work, and Nick Wittgren struck out six of the eleven batters he face to shut down Michigan. Fourteen strikeouts is a great way to start a series. END_OF_DOCUMENT_TOKEN_TO_BE_REPLACED

Here are the pictures from the thrilling win Thursday night.

END_OF_DOCUMENT_TOKEN_TO_BE_REPLACED

Courtney Moses gets off one of her seven first half threes

The Boilers gave the fans some bang for their buck last night by winning a thrilling game 65-64 over Michigan. Brittany Rayburn hit a jumper with 11 seconds left to give the Boilers the win in front of the dollar night crowd. The special promotion allowed fans to see the game for $1 along with specials on food and drinks. I noticed a few more people in the upper bowl, but the lower bowl seemed emptier than usual. Maybe it was because of people like me who sat with other people in the upper bowl instead of their normal seats down low. It could have been the icy roads that kept a few away as well. I really have trouble understanding why more people don’t come out and watch the team. I know that I never really did until a couple of years ago. Of course now we all know how I was hooked, and drive way too far all winter long to see them play. Come on out and watch a game and you might get hooked too.

END_OF_DOCUMENT_TOKEN_TO_BE_REPLACED

This week could have had a huge dilemma for the game of the week. With the Boilermaker Blockbuster that could have been the games of the week. I have  party to attend though so I can’t head down to Indy. Since I have to attend the game of the week I guess that this week’s game has to be the men against IPFW on Tuesday. Former Indiana player Dane Fife brings his Mastodons into Mackey to face the Boilers. Very shortly the non-conference games will be over, and each game will have a little more meaning. After some great matchups it has gotten a little stale. In just over a week the Big Ten season will start, and the pregame notes will get a little more serious. For now let’s just get to the picks. END_OF_DOCUMENT_TOKEN_TO_BE_REPLACED

Confessions of a Sports Junkie
Create a free website or blog at WordPress.com.