Kevin Eichhorn warms up prior to the game

After five tries the Whitecaps finally were able to play a road game, and they celebrated by winning game one very easily. Game two was a little tougher for them, but they still won 6-3. One of the reasons that I wanted to see this team was to see Mark Eichhorn’s son Kevin pitch. He started game one for the Whitecaps. He seemed to be doing really well until the fifth. He gave up two runs to the Silverhawks, and was pulled with two outs in the inning. If he had been left in to get one more out he would have been the winner of the game. Since he was pulled he did not qualify.

Once again it seemed as if the bottom of the order did the damage for the Whitecaps. Positions 4-9 in the lineup each had one RBI. For some reason the bottom of the lineup really seems to have found something. In the second inning the last place batter once again had his say in the game. The left fielder Jeff Rowland hit a ball that landed just fair in front of me, and then bounced into what will be the patio section for a ground rule double. 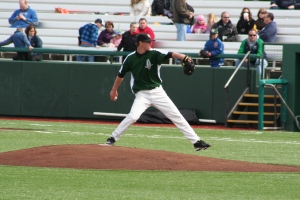 This was the second time I have been in the Cove this season, and the second time that I saw J.R. Bradley pitch. Of course this was also the second time I have seen Bradley get the loss. He is one of their higher prospects though so you think he will start to improve. Today he gave up 5 runs (4 earned) in his five innings of work. He really lucked out in the third inning, or he would have had a much worse game. You could see him really baffle the hitter, but then he would give him a cookie.

Since I have been paying attention to the Silverhawks I can’t remember them coming out of the gate hot. For some reason they seem to take a while to find themselves. The slow start is not surprising at all. It will be nice to see who comes to the front when this team starts playing better.

Here are some pictures that didn’t make the cut above: 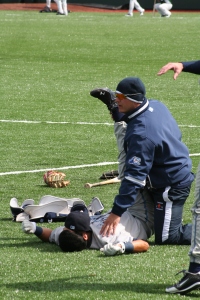 A Midwest League ball in the dirt section of the turf

DH Billy Nowlin with a big swing. He would later knock one out onto a dirt pile in left field

A shot of Kevin Eichhorn on the mound

Keon Broxton gets the first hit off Eichhorn in the 4th with this bunt. 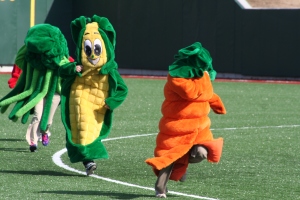 Somewhere in this shot is the new Purdue Pete design

As usual here are my scorecards from the game:

The West Michigan side of the sheet