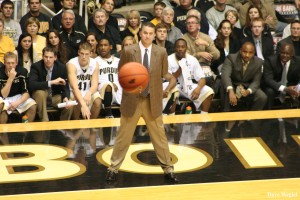 Matt Painter keeping his eye on the ball

Well now that the roller coaster has apparently come to a stop we now think that Matt Painter will remain a Boilermaker. I still don’t know what to make of the last few days. My first thought was that there was absolutely no way that Painter would go to Missouri. Who are these people that think that he might? Then at some point Sunday night after being away from the computer most of the weekend I started to see some reasons why he might go. Then it started to become real. Of course I had some frustrations that I put in my post about the possibility of him leaving. Those frustrations just seemed to build until I found out that he would stay. So what does this mean for Purdue now?

If the whole crux of this thing was to make the environment better for winning a championship the obvious question is did he accomplish that? By staying I would surmise that he thinks that he did. I guess that we will see as time goes on. I think that the pressure to win has just gone up, and losing two of the best to ever play at Purdue won’t be easy to replace next season. In a year when the eyes of a lot of people will be on the program Matt will have to do his best coaching job yet.

While he may have accomplished some good things for his program it did not come without any negatives. One of those as most people know already is the Nancy Cross email where after saying that Purdue is doing all they can to keep Painter she reminds the fans that they haven’t given as much money as she would have liked them to. The campaign for the Mackey renovation did not generate the money that they thought it would. This is not the first time I have heard her talk to fans about this campaign in a condescending manner. The fact of the matter is the campaign came during a very tough time in the economy. I appreciate athletics as much as the next guy, but certain things have to be taken care of before money can go out. I assume that I am not the only one who saw their income decrease the last couple of years.

The other catastrophe had to be the rally for the coach that saw 11 people show up. Granted one of them was the President of Purdue, but isn’t she really part of the reason the rally was needed? That along with the Cross letter gave all the detractors something to wave at us. Now I guess it is time to hit them where it counts. This team had better start winning. The next rally for Coach Painter will be on 11/11/11 at the dedication game. I am sure that around 14,000 people will be at that one.

While I was writing this even more rumors started circulating that Painter had gone to Missouri. I just hit save draft, and checked to see what was going on. Watching the fanbase meltdown only to get it together to celebrate a couple hours later was interesting to see. The rollercoaster took one final set of crazy turns just before the finish. We got the outcome we wanted, but at what cost? For some reason I think that I will wait until I see a video of Matt talking about staying at Purdue. Even then I will wonder if it has been doctored. Somehow I wonder if this crazy saga is over.

Update: GoldandBlack.com now reporting that the team is being notified that Matt Painter is staying. It looks as if this thing is finally over, and now the march on New Orleans can begin again. I have changed the title of the post to reflect this.