I was lucky enough to be at the United Center today for the Boilers practice. Last year I saw them play three games in two rounds of the NCAA Tournament, but different things prevented me from seeing them practice. Since they were so close this time I thought that I would see what it was all about. I got to the United Center early so that I could watch some of the other teams as well. When Purdue was not on the floor the most exciting thing was watching the tourney games on the TV’s located on press row. Luckily they had a few games going at once so it was like I was at the coolest sports bar in the world.

Purdue took the floor with no incident. I have never seen them practice so I could not tell you if today was a good practice or not. I did enjoy watching Robbie Hummel pass the basketball again, and enjoyed even more watching him thrill the fans in attendance by nailing a half court shot underhanded. The Boilers looked loose, and to me that is very important. With the practice out of the way all that is left will be the games tomorrow. Since I am stuck up in the 300 level I took a few pictures today while I had a good view. Who knows what they will look like tomorrow. Here are some of the pictures that I liked the best.

E'Twaun, LewJack, and TJ all come out early for a look at the United Center

The weird signage. I still can't get used to it not being the first and second rounds.

No extra padding was placed on the ball rack 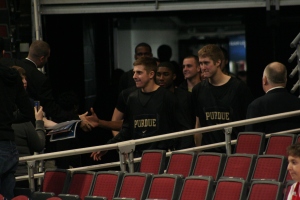 Ryne Smith leads the team out to practice

JJ and E'Twaun get loose

Travis Carroll with a dunk early

JJ after a bucket

Smooge waiting for the pass 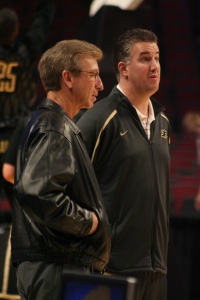 Matt Painter and Wayne Larrivee talk during the practice session 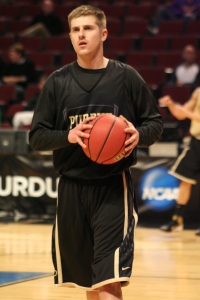 A healthy Ryne Smith during a shooting drill

Robbie Hummel passing the ball during the practice

JJ with a shot

Painter enjoying a lighter moment. It probably has been a stressful week for him 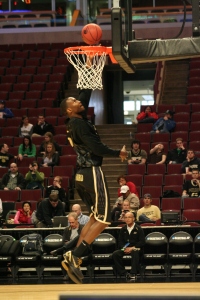 JJ ready to throw it down 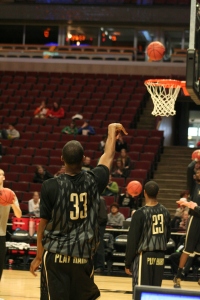 Moore watching his shot go in

A post practice huddle with JJ talking to the troops

Legendary coach John Thompson catching part of Purdue's practice. No towel that I could see though.