Last year I really wanted to go to a NCAA Tournament game. I was not ready to see my last Boilermaker game in person. I bought tickets the day after the announcement was made. The only problem was that I could not find a cheap flight or hotel in Spokane. The game was Friday so I sat around moping all week because I could not go. I think I wanted to go for the most part because everyone was picking against them. If you remember even President Obama picked against the Boilers. Everyone seemed to think the team would make an early exit. The day before the game I found a cheap flight, hotel, and car package for Seattle. I wanted to go there anyway so why not just stay there. I booked the flight in the morning, and left at night.

My view of the Spokane Arena from the parking lot

I was very pumped to see my first tourney game. After all the years of faking illness to watch them on TV I was finally going to see one in person. The drive across the state seemed to last forever because I wanted to get there so bad. For some reason I was able to park across the street from the arena for $5. I could not believe how lucky I got. I know a lot of people parked in that lot, but the price just seemed more than fair for a big game. Purdue was the first game so I went straight in to see them warm up.

JaJuan Johnson takes the opening tip for Purdue in Spokane

Purdue did not get off to a great start. I am sure many of the experts watching on television were thinking that they had the pick right. Purdue actually went into the half down three. This was going to be a dogfight. Or was it? Purdue came out of the break on fire. They scored 13 straight to open the second half on their way to a 20-3 run. Keaton Grant had 11 of those. The seniors really put the team on their backs when they needed them the most. Siena closed the gap to three with just over a minute left, but Purdue pulled away to win 72-64.

Chris going in for the dunk during the big second half run. I love the look on JJ's face at the bottom

The Purdue section was not very big that day, but it was sure rocking when the Boilers were on their run. That is why it is so much fun to attend these kind of games. I was around people that I had never met before that day. By the end we were high fiving each other and reveling in the win.

After the game was over I watched our eventual opponent Texas A&M take down Utah State 69-53. The best part about the game was the fact that both teams were nicknamed the Aggies. I had so much fun that when the games were over I walked up to the ticket window to try and get a seat for the second game. I bought a ticket to see the nightcap with no problem. When I walked into the night session I was shocked at where my seat was. I was three rows behind the Michigan State bench with Jud Heathcote across the aisle from me. The seats were so good that I wish that I had snuck my camera back into the arena. Michigan State played yet another team named the Aggies this time from New Mexico. It took everything that the Spartans had to survive this one. Kalin Lucas had a great game, but it took a lane violation late to help seal the deal. The final game of the night involved Maryland and Houston. Even with the good seats this was a tough game to watch for some reason. Maybe I was tired from the long day and already seeing three full games. I left with about ten minutes left to get a head start on my way home.

In all this was a good day. I saw the Boilers prove a lot of people wrong by winning a game you should win. They were the #4 seed playing a #13 seed after all. Sometimes the greatest sports moments are the ones after a fall. Purdue was down three at the half against an opponent they should have beaten. That is what made the run to start the second half so much fun to watch. Here are a few pictures from the Purdue game that day:

Do you ever feel like the whole team is guarding you?

Chris then shrugging him off to make an easy shot

LewJack looking for the open man 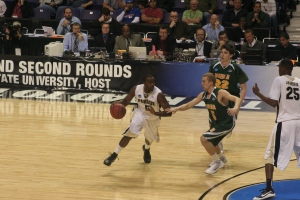 Keaton driving in the second half. He was huge when they needed him

The two seniors embrace after the win

JJ acknowledging the fans after the win

(This is part of the continuing process of reliving some moments that did not make this blog. I quit blogging for a short period last winter because I felt that I was spending way too much time on this blog for the few people that were following it. Thankfully I was talked into blogging again, and have not quit since. As if by chance the amount of people that follow the blog increased as well. As always thank you for stopping by.)

Error: Twitter did not respond. Please wait a few minutes and refresh this page.